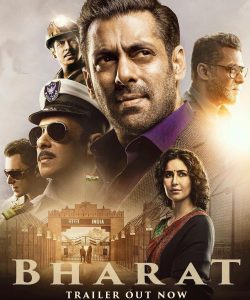 Much Awaited Movie Trailer Starring Salman Khan “Bharat” has released today. There was much hype has been created around this movie. Every fan of Salman Khan was eagerly looking forward to this movie glimpse. As Salman Khan has hinted of his new film will be released On Eid-ul-Fitr.

Bharat Movie has written around a life of a middle-class man who in his childhood has migrated to India during 1947 partition. The life journey of this middle-class man Named ” Bharat” in the movie shows the ups and downs in the life of a normal person. “Bharat” is an official remake of a Korean Movie “An Ode To My Father” which also depicts the life journey of an ordinary man.

Bharat Movie has a star cast it has Katrina Kaif in the female lead role, Disha Patani and Veteran Actor Jackie Shroff who is playing a role of Bharat Father in this movie. However, there is a twist deliberately one character has been hidden throughout the trailer, and that character was of Tabu. According to sources the reason behind Tabu character hid is that her role will make a twist in a movie as Tabu is going to appear after an interval. Bharat Movie directed by Ali Abbas Zafar and its a production of SKF (Salman Khan Films), its musical rights has allocated to T-Series. Bharat Movie is going to release on Eid-ul-Fitr after the Holy Month Of Ramazan.

Read Also: How To Do Bigg Boss Voting

The public has received Bharat Movie Trailer with mix emotions. Some are thrilled to watch the trailer, and some are making fun of things that have been showcased in the trailer by tweeting them.

When you write 2 pages For 2 marks answer