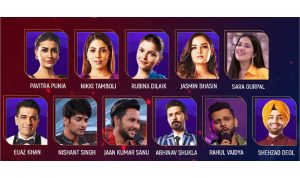 So next day’s start as usual with song and everyone fighting for things which they want to get as per rule there are only 7 things can get by all the contestants. And later on, their general talks fun and jokes. As Rubena is in the garden area as so she is just allowed to use the washroom and living area but for a limited time.

Then it’s time for getting 7 things from seniors and all the freshers having a fight about their needs and everyone against Nikki. Nikki gets every day one or two unfair items. Later on, Nishant gives up for her that he is not going to sacrifices for Nikki. As Gohar announced nobody can have lunch till 7 items for today are not going to be finalized.

But at the same time, Pavitra says she needs to have two things not one as she was giving up before for Ejaz. Later on, everyone is fighting rather than she got today thing they were all going to get more items and they were all going to be hungry. As every participant saying she is not like that she fulfills her promises if she does so then the next day still, they are going to face the same issue.

There is a Bigg Boss announcement to resolve this conflict. And explain the cause of the show that everyone has to show their actual behave. Neither all of them are could be the winner of the show. The winner is only one. In this show some time few contestants made strategies to help each other to get an advantage in their weak time as per the last task every fresher boy gives their jewelry to Abhinav to win let him win as a strategy either loss every one anyone should win.

Moreover, explain at the beginning of the show 7 contestants were accepted and 4 of them are rejected. later on, 4 of the rejected households are fulfill given a task to a position in the house and three of them efficiently complete their task and got place except for Rubeena. Hence, now Bigg Boss gives chance to Abhinav’s husband of Rubeena if he sacrifices his immunity so His wife may get a place in the house as an accepted contestant same as other.

And ask Abhinav is he wants to give up for her wife or not and unexpectedly he denied this opportunity. So, BB announced she has to live in the garden area the same as she lives before until his next orders. Furthermore, Bigg Boss announced multiple times he watches Robeena use house furniture which is against the rules and seniors also need to keep eye on it and they have some special powers they should use them properly.

And there is again the same discussion are they going to decide 7 items or everyone is going to be hungry. Nikki decides to have one item rather than two. Everyone tries their best to realize her to let it go other contestants also have the same right. Finally, Sidharth convinces her to do so as everyone saying and she announced, that she is going to take a leave today and the next day she will get her clothes.

All the households are happy now finally she is understanding. Even they ask Sidharth why he guides her then he explains he isn’t only guided, Nikki. But he tries to convince the majority of the persons. So, what’s the issue, it is not his right to convince all the time but he did just for the best.

Later on, there is a task given by Bigg Boss to all the freshers for the next stage of TBC as Abhinav already qualify for this. The task is for the garden area is decorated as air and Sidharth is his landlord and there are 5 hot and beautiful girls which are going to Sidharth make him love.

Girls may get tips from Gohar and Hina about how they could make Sidharth love her more. All girls are competing with everyone and who so ever winner she is going to be the next TBC. There are 3 places sid tattoo polar, sid garage, and sid beach café. Sidharth is eliminating one girl after the first round and at the end out of three fresher girls only one is going to be the winner and Sidharth is swipe girls’ picture to the cross one by one at the end there is a task and rules decide for the task.