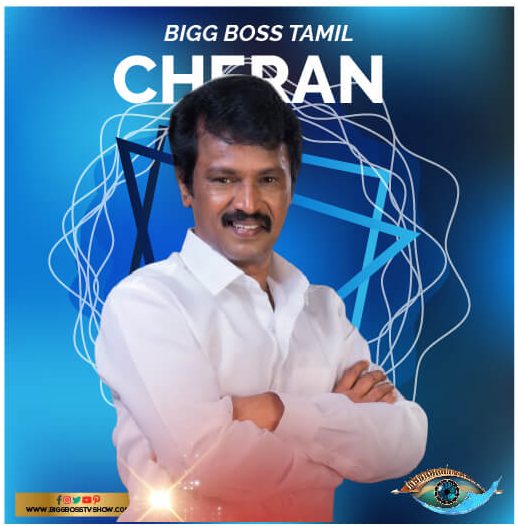 Cheran is an Indian actor, film director, producer and writer. cheran was born on 12 December 1965 in Melur , Madurai, Tamil Nadu. he belongs to a Hindu family, his father name is pandian and his mother name is kamala. Cheran is married to selvarani from whom he has children nivedha priyadarshini and damini. now a days cheran is living in Chennai, Tamil Nadu , India. Cheran Has Also Took Part In Bigg Boss Tamil 3.

SAVE CHERAN BY VOTE CORRECTLY: CLICK HERE TO VOTE

Cheran always wanted to live a glamorous life of entertainment industry that’s why he has started actong in plays in his school life. Cheran has worked as production manager and assistant manger in his earlier stages of career. Cheran has directed movies like  ” bharathi kannamma” in 1997 and he has started his acting career from the movie called “porkkaalam”. cheran most appreciated role of his career was the lead role in 2004 Tamil movie “autograph”. he has also directed, wrote and produced “autograph”. “autograph” was the superhit and was played 4 times in Montreal film festival. Cheran has also founded “c2h” to tackle the copyright infringement issue in Tamil film industry in 2004.

Cheran has also participated in Bigg Boss Tamil 3. Kamal Haasan who has also worked with cheran in his earlier days welcomed cheran onto the show and was very happy to see him again after a while.