Gauhar Khan was born on 23 August 1983 in Pune, Maharashtra, India. She is the youngest one in her siblings. She had to get her education in Pune. She had done her Matriculation from Mount Carmel Convent School, Pune and had done her graduation from Ness Wadia College Of Commerce, Pune. She belongs to the Islamic faith and currently living in Mumbai.
Gauhar Khan started her acting career from a film name Miss India: The Mystery (2003) but got her first significant role in Movie Rocket Singh: Salesman of The Year. She debuted the TV Screen with her participation in a dance show named Jhalak Dikhla Jaa 3 (2009). She partnered with Himanshu and ended up a 1st Runners-up.

Gauhar Khan was not recognized until her outstanding performance in Rocket Sing: Salesman of the year. She nominated for three awards For her Role of Koena Shiekh in Rocket Singh. Then in 2013, She came back with her excellent performance in Ishaqzaade the Movie. Gauhar had done the role of Chand Bibi in Ishaqzaade. Arjun Kapoor and Parineeti Chopra were the lead roles of Ishaqzaade movie. Gauhar Khan nominated for Best Actress In A Supporting Role For Ishaqzaade at Renault Star Guild Awards, 2013. Dolly Ahluwalia grabbed the award for Best Actress In Supporting Role for her role of Mrs. Arora In Vicky Donor. The Super Star Salman Khan hosted Renault Star Guild Award 2013.

READ ALSO: HOW TO PROPERLY DO BIGG BOSS VOTING

Gauhar Khan went into Twitter Spat with Bigg Boss 2 Contestant Payal Rohtagi when Payal had tweeted about the removal of Article 370. Article 370 solely made for Indian Occupied Kashmir, and both Celebrities went to reply to each other instantaneously. Kaushal Tandon also came into the support of Gauhar Khan in this matter. 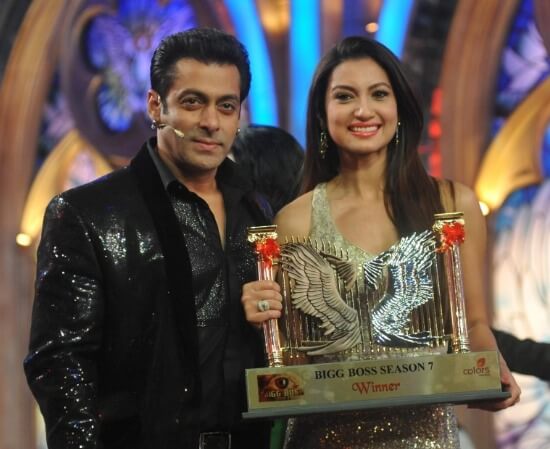 Bigg Boss 7 Winner Gauhar Khan was the most liked housemate in season 7. She had fought and played better than any other contestant. She was into an affair with her fellow housemate Kaushal Tonfon in Bigg Boss 7. Tanishaa Mukherji was ended up as 1st Runners-up and Ajaz Khan stayed at the spot of 2nd Runners-up.