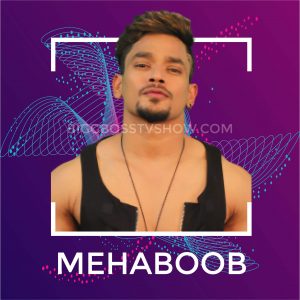 Mehboob Shaikh is a famous YouTuber, Dance, and Actor also he got fame by his YouTube channel. He also participates in Big Boss 4 Telugu. Most of the time he used to make funny and comedy videos.he is also made comedy and sometimes dance videos. After YouTube, he got fame on Instagram also. He is TikToker before it was banned in India, he has a huge fan following on Tik Tok Also. He used to make videos on multiple topics mostly are comic and entertaining that’s why he becomes famous and his fan following increase day by day.

Mehboob is such a handsome man and having an attractive body that’s why he has huge fans who are girls. For maintaining his body, he has done GYM on regular bases. If we talk about his Height, he has 5 feet and 6 inches body with 65 Kg weight. He has black eyes and black shiny hairs which gave him a more generous look. He is a bodybuilder also and goes to the gym regularly.

He was born in Hyderabad, Telangana on 29 July in 1995. He is 25 years old a famous known actor and dancer. He has one younger brother Subhan Shaikh. His father is a businessman and his mother is a housewife and takes care of home very well. He and his family follow Islam and they have Indian Nationality. The name of his parents is not yet known.

In the initial base, he starts his work through social media special from Instagram. In very little time he got huge fame and he got about 1Million fans over Instagram and Tik Tok. By the time he also collaborates with others also for gaining more fans. Later on, he starts his own YouTube channel by the name Mehboob Dilse. Here where he finds his actual fame, he got 300 Thousand subscribers and it’s a sensation on YouTube. His famous video is from 96 it was a song “InkemInkemKavale” from Geetha Govindham, “MaateVinadhuga” from Taxiwala, and “KaadhaleKaadhale” and many more. Now recently he played part in the reality show Big Boss 4 Telugu.

Mehboob is a very living personality he has good height and he loves music traveling and eats food. He likes non-vegetarian food and traveling while he was free. He has a girlfriend her name Navy Marouthu (Rumoured). He loves fiction heroes especially Spiderman his favorite hero. He also has a Hyundai car.

Awards and Achievements by Mehboob Shaikh

He is a famous YouTuber and has huge fans over Instagram and also on Tik Tok before it was banned in India. He also plays part in Big Boss 4. There is no such record we have about his awards.