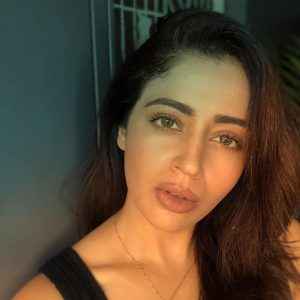 Neha Pendse, an Ex-Bigg Boss Contestant, Was Born on 29 November 1984 In Mumbai. Her Zodiac Sign is Sagittarius. She is a real Mumbaikar Born and Brought Up In Mumbai, and she Got her early education in the same city. Official Neha Pendse Instagram and Twitter account links are also displayed in a table.

Neha Pendse Debuted in her early age as a child artist in a TV Serial named “Captain House” back in 1995. After playing a role in ” Captain House,” She worked In “Padosan” In 1996. Then she had made her Film Debut in 1999 by appearing in “Pyaar Koi Khel Nahin” Movie. She is a renowned actress who worked In Movies of different language like Hindi, Telugu, Tamil, and Malayalam. She had also appeared in Item Songs of “Sharyat” and “Kurukshetra” Movies.

Neha Pendse Father Name is Vijay Pendse, and her mother name is Shubhangi Pendse. She has one elder sister too. She has been a family Girl who had to spend her Childhood and Her Adult Age In the same city where her family lives.

Neha Pendse was the first contestant to be evicted from Bigg Boss 12. She was assumed to be the strong contestant who was destined to go farther in Bigg Boss Tv Reality Show. After Getting out of the house, she had talked about her experience in the Bigg Boss House and during that she had blamed Bigg Boss 12 Winner Dipika Kakar of hurting her trust. As that evident that Neha Pendse Was nodding yes to everything that was said by Dipika Kakar.