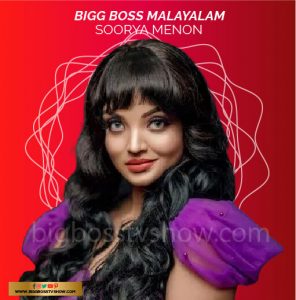 Season three of Bigg Boss, the biggest reality show in Malayalam has started today. Nobby was the first to arrive. Kitilan Feroz, Manikuttan and so on, the audience’s favorite stars came to Bigg Boss. Now here comes another very special contestant. Mohanlal said so and was invited to Bigg Boss. Surya Menon has arrived.

Surya is one of the first women DJs in Kerala. Surya has also acted as RJ. She has also acted in some movies. Surya also shared her experience of meeting Mohanlal while acting in the movie Kandahar. Surya was talking about the simplicity of Mohanlal. Surya says he also worked on channels. Surya is also active in modeling.

Surya says she has a happy family consisting of only her father and mother. Surya says that she is a girl who believes in her own personality. Surya also expressed a great desire Surya said she needed a house to protect the elderly. Surya said that Bigg Boss needs a house to help older people look like gold. Bigg Boss will be watching to see if Surya’s desires will come true.