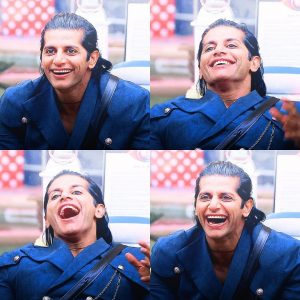 Karanvir spotted at Matrix Fight Night Launched Ceremony that was arranged by Tiger Shroff and his Sister Kishu Shroff. Matrix Fight Night is the platform at which martial arts fighter from all over India will come and fight and root for the win. Karanvir who has known as stylist personality has invited at the launch of this event.

What an amazing #MatrixFightNight @tigerjackieshroff congratulations on this franchise…. Your hardwork and passion translates into everything… God bless and all the best. P.S @dishapatani we need a picture together ? @kishushroff great hospitality ? @chintanpavlankar – “The behind the scene man”

After Bigg Boss 12 Karanvir has regained his old day’s popularity and again become the blue-eyed boy for his fans. He has known for his new trending styles, and he has been seen flaunting his new look in a memorable picture that has taken with Tiger Shroff and Disha Patani at the background.

Karanvir will be seen at the next project Humain Tumse Pyar Kitna Along With Priya Banerjee which will release in Start of May.