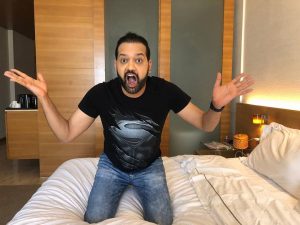 Rahul Mahajan was evicted from the Bigg Boss 14 house on Monday. All the contestants were nominated this week after Aly Goni and Nikki Tamboli flouted some house rules.

The pilot-turned-entertainer had entered Bigg Boss 14 as a challenger along with Vikas Gupta, Rakhi Sawant, Kashmera Shah, Arshi Khan and Manu Punjabi. Given he had a close bond with Arshi and Rakhi, the two were seen trying hard to team up with him. However, Mahajan made an effort to bond with everyone in the house. And that led to the two ladies fighting with him time and again.

While Rahul Mahajan did not actively participate in the day-to-day activities of the house, a recent task brought him under the spotlight. Being in the character of a ghost, Rakhi Sawant had tried to assault Mahajan, by pulling his dhoti, which irked him and the other housemates. However, after being summoned by Bigg Boss, Rahul forgave Rakhi, and the two were back to being friends.

Before entering the show, Rahul Mahajan told indianexpress.com that he wants to add a lot of spice to the otherwise dull season. “I plan to add some masti, laughter, madness, and entertainment. These contestants seem to be sleeping. I want to wake and shake them up, so that they can have some enthusiasm, as the season enters its last stage,” he said.