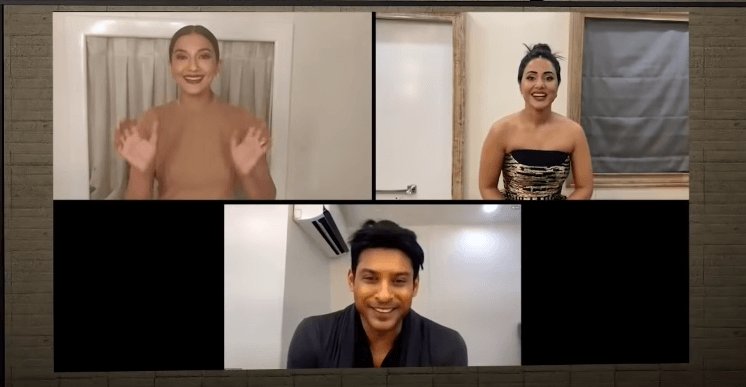 As a bigg boss 14 is going to start on 3rd October 2020. As every season has some changes and new games conflicts and required new strategies to win the title so this season also. This season is going to be having a lot of changes because of coronavirus. So they are trying their best to make this season more interesting and fascinating for both contestants and viewers also. Hopefully as previous seasons this time also it will get more attention and popularity. In this season Siddharth Shukla, Gauhar Khan, and Hina Khan are also participating in this show. Prince Narula is also the expectation to be part of this show as he was the winner of Big Boss 9.

In the other two promos, Hina Khan, Gauahar and Sidharth Shukla makes their appearance in video Big Boss 13 and share their reviews about this season. So far there are three new promos of this show where actors and their social media handlers share on Saturday evening.

In one Big Boss 13 video Sidharth Shukla saying “I just care about what is right and forget about others. And I will win this season also as I was before with the same principals. And let’s see who will put up a strong competition?

Gauhar Khan is promising in the video this season will be full of unpredictable moments and surprises.in this video she is saying “what so ever the circumstances weather its Big Boss or its life I always support the truth. But in this season things are not going to be easy as before. Instead of these contestants will face unpredictable hurdles in their journey throughout this season.

Hina Khan is a contestant of the Big Boss 11 season. She is also known as Sherkhan in the show. She says if she may not able to win the title but she won’s the hearts of viewers. She said I always respect and care about the relationships made and I never break relationships and neither I forget those who break her heart. She says even though she was not won the title but she won’s the hearts that her winning. But this time game is going to be different.

All these three not only promo about the show but they are also part of the show. As per Indianexpress.com they are not only taking part in this show but they have special powers in this season where they meet with Salman Khan on the premier nights also, they are throwing different challenges to the participants.

This season is going to be spicier that’s why they add few seniors to add more twists in this show. Gauahar and Sidharth both are the winners of previous shows and Hina and Monalisa were the most popular contestants. Every Big Boss season Hina associate herself with this show, she seems to be happier to come back on this show as per indianexpress.com.

This show is going to be on air on the 3rd of October 2020 Monday to Friday at 10 30 pm. On weekend at 9 pm it will be with Salman Khan in Weekend ka vaarepisode.contstents will be entered in the house in the launching episode. All the contestants are being quarantined in the hotel it was in Mumbai for the safety and coronavirus scare before entering the house.