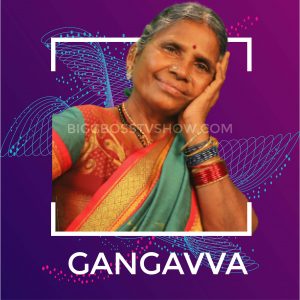 Milkuri Gangavva is an Indian you tuber which is very popular on social media as the subscribers on her YouTube channel are more than 1.67M. Her exact date of birth is not confirmed as she has no record sources but after different assumptions on social media, we can say that she’s between 60 to 65 years old. She was born in a small village named as Lambadipally Village (Telangana state).  She married in a poor family and experience many tough days in her life but then she got such a huge fan following on YouTube through her interesting performances in her son in law’s YouTube channel named as “My Village Show” which make her successful. She is a contestant of Bigg Boss Telugu 4.

She is at the stage of 60 plus. Her Height is 4 feet and 11 inches. Her weight is approximately 49Kgs. Her color complexion is dark and her eyes color is black. She is an old lady so her hairs are in black and white color. Somehow, her physical appearance also gives her an extra advantage for being a social media celebrity which we can also see and enjoy through her performances on social media.

She was born in a Village named as “Lambadipally Village”. Her date of birth and even the birth year is not confirm, as she has no official record of her birth. Still from her personal calculations and different sources, her age is somewhere between 60 to 63 years. She has three daughters and a son. Her Husband also died a few time ago. She also has 8 grand children.

She was dropped out from a local government school in her village at 1st standard. Due to the lack of education she can’t read and write properly. Her son in law and some other team members teach all the dialogues and performances to her. After understanding all content from them, then she delivered in her own way and style.

Gangavva has millions of subscribers on youtube. She achieved such a huge fan following on YouTube and Instagram through her interesting performances in her son in law’s YouTube channel named as “My Village Show”.

Milkuri Gangavva is not only a famous youtuber now, but has also become a tv celebrity as she is selected and participated in a famous reality show named as Bigg Boss Telegu Season 4.  After facing so much hardship in life, she finally achieved the title of social media celebrity at this stage of life and succeeds in making the millions of fans.

She was born in a poor agricultural family. Unfortunately, her parents died when she was a kid. Then she was brought up by her grandparents. She got married when she was just at the age of 5. At the age of 26, she has 4 children. Unfortunately, her husband was an alcoholic and he used to abuse her physically. She also faced strong financial crises in her life. Her husband and a daughter also died a few time ago. But she never gave up worked harder and become a role model for all the women. Her son-in-law uploads her videos on YouTube, which are mostly related to village culture and rural families. After gaining more than a million subscribers on youtube, she also received a gold play button from YouTube in 2019.

Awards and Achievements by Gangavva