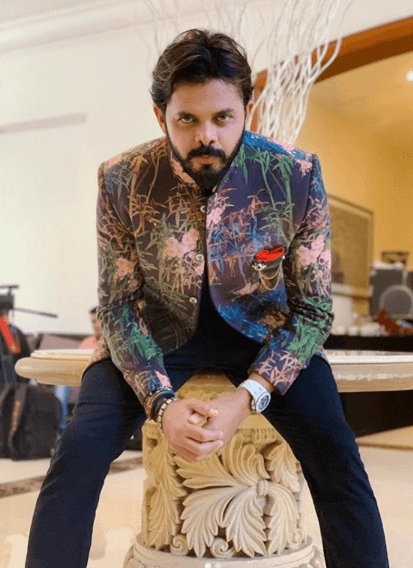 Shanthakumaran Sreesanth ( S. Sreesanth) was born on 6 February 1983 In Kothamangalam, Kerala. Sreesanth Nicknames are Sree and Gopu. He belongs to Hindu Family and is a devoted Hindu.

Sreesanth had started his cricketing career as a leg spinner, and he had role modeled Anil Kumble in his early days. But His elder brother has encouraged him to become a fast bowler after watching his interest in bowling fast. He was first inducted into a National Cricket Academy in 2000, and then after that, he went to MRF Pace Foundation in Chennai. He debuted against Goa in 2002 Domestic season and Chirped 22 Wickets In Ranji Trophy.
After his performances in Domestic Cricket, he was selected for India-A side playing against New Zealand in Rajkot.
Then after that, he has performed well in 2004 Ranji Trophy and took a Hat Trick Against Himachal Pradesh. He then selected in India B team and played in Challenger Trophy and Become a Man of The Tournament After This Performance he was selected for Indian National Side in October 2005 Against Sri Lanka. Sreesanth is a famous cricketer who was also a part of world cup winning teams of India.

During IPL Sreesanth and Harbhajan got into a fight and then Harbhajan slapped Sreesanth that creates a lot of stir among them.
Later In Indian Premier League Sreesanth was caught doing spot-fixing. BCCI suspended him and prohibited to play any kind of cricket anywhere. After spending some time in exile, he challenged that verdict against him in the supreme court and supreme court revert the decision of BCCI and ask them to review the punishment and make it lesser than before.

Sreesanth Wife name is Bhuvneshwari Kumari, and they Got Married on 12 December 2013. They have two children one Daughter Named Sree Sanvika and one Son Named Suryasree. Sreesanth Father Name is Santhakumaran Nair, and his mother name is Savithri Devi. Sreesanth is the youngest one in his siblings; he has one elder brother and two elder sisters. His Brother Dipu Santham has his own Music Company in Kochi. One of his sisters is a famous Television actress, and other is married to a playback singer.

Sreesanth has taken part in Bigg Boss 12, and he was ended up as a runner up. He was punished by BCCI when he took part in Bigg Boss 12. He competed with 20 contestants and survived till the final. Dipika Kakar had won the Bigg Boss Winner title. But after even ending up as a runner up Sreesanth was happy as he was able to clear his image in front of an audience that was damaged by the spot-fixing scandal.