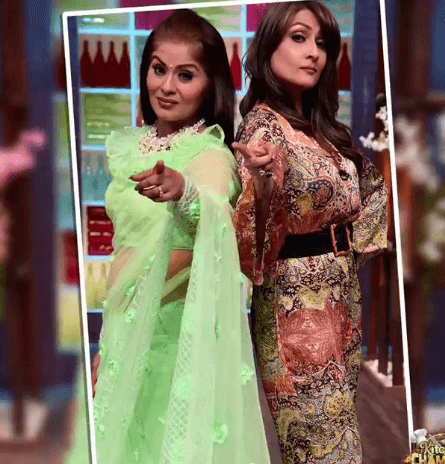 Kitchen Champion is the show that Makes two teams, compete to one another and judge who has made the best food. During the Food Making audience get entertained by the gossip, dance and celebrity efforts of preparing food.
The Kitchen Champion Show has introduced these two TV Actresses in their show promotional video. In which they Quote. “Don’t forget to watch Kitchen champion tomorrow. At 1:30 pm. The upcoming celebrity guest Watch their master you can’t stop laughing. Fun in kitchen champions with your favorite television celebrities. Don’t miss the chance to watch your favorite celebrities cooking .#kitchenchampion @urvashidholakia9 @sudhaachandran”.

Urvashi will emerge with her twin sons, and Sudhaa will be accompanied by her mother. These teams will try to beat each other on the food front.
Sudha has started her Tv Career with the show named Rishtey, but she has honestly got popular with her significant roles in TV shows like K Street Pali Hill, Chashme Badoor and Kahin Kisi Roz. She often considered as a villain face of Indian Television as she usually has cast in doing negative roles.

Urvashi has been a very successful Television actress. She had her twins in a very early stage of life. After embracing motherhood, she had stepped into an industry and flaunts many roles in television shows like Dekh Bhai Dekh and Kasauti Zindagi Ki. She was a winner of Bigg Boss Season 6 and Nowadays is working in Udaan and Mein Marjawan projects.