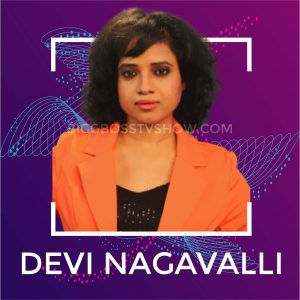 Devi Nagavalli is an Indian journalist and Also News Presenter at Telugu Tv9. She is quite honest and fearless while doing her job and interviewing celebrities. Now, she is also a part of the most controversial Television reality show Bid Boss 4 in Telugu. Her live discussions of interviewing and news live on weekends. She is used to be a famous anchor as a hot seat and she also has the ability to deals with reports on the ground. She even two times wins the Prestigious NANDI Award.

Devi is an attractive and good-looking girl and she also has an attractive personality. Her body measurements are impressive. She is 5 feet and 4 inches long along with 55 Kg weight.

She has black curly hairs and her eyes are also black. Her body structure is skinny. As she was born in July so her zodiac sign is Leo. She doesn’t have any tattoo on her body. Her confidence and way of talking make her unique and attractive.

Devi was born on 12 July in 1991 in the Rajahmundry. She is now 29 years old. She belongs to a middle-class family. Her religion is Hinduism and she has Indian Nationality. There is no such information available for her family and how many siblings she has.

Devi completed her early education from Sri Gowthami Smart School, from Rajahmundry. Later on, she got admission at Andhra Pradesh University and got her diploma in Mass Communication and journalism. While she was a child she used to speak like a journalist and watch them keenly and now her dream comes true. Now, she is a famous Journalist. She is very good in her job. She is fearless and handles every situation while reporting.

She started her career as a news anchor. When she completed her diploma, she joined news channels and started her journalism. She works with many Television news channels and her work everywhere is remarkable. These days she is working on popular Television news channel TV9. She is famous for her interviews and her show Weekend Live Discussion where she conducts interviews of famous personalities. Mostly other actors came to her shows to promote their movies and then their movies got high ratings and earn well after the promotion on her show. While performing in television channels, she was threatened by multiple times but she is fearless and faces every situation bravely.

Awards and Achievements by Devi Nagavalli

Devi won multiple Honors and awards throughout her career. In 2009, she got her first award in the Telgue media National Television Award. She also won NANDI Award in 2019 by Andhra Pradesh Government. In 2010, she got the National television Award 2nd time and in 2017 she got Award of Most Desirable Women in Hyderabad Times.